Why the Orthodox Church is the Best 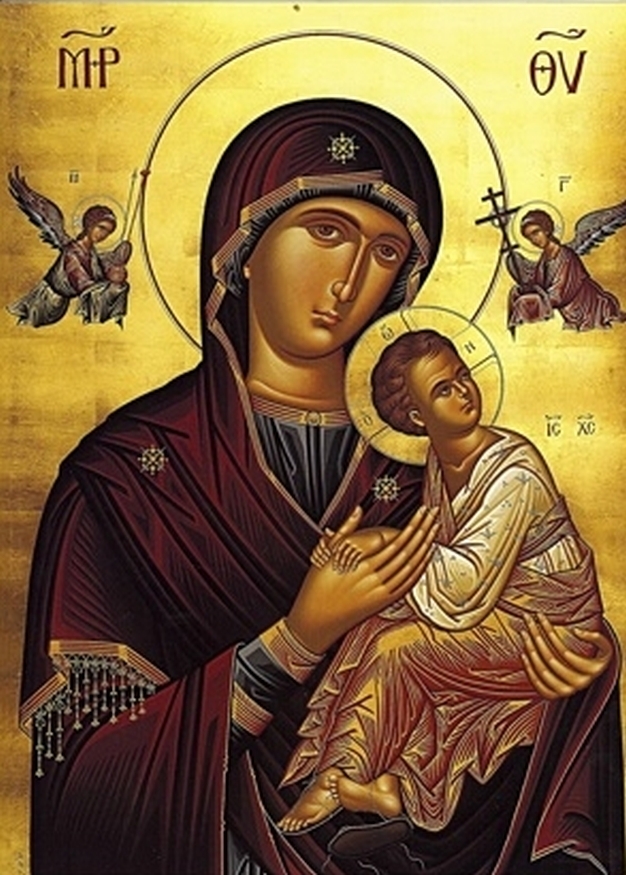 The Australian Union of Students has come to the conclusion that Australia should become an Orthodox Christian country like Greece and Cyprus. These countries have the lowest crime rate in Europe, and are well-known for their high quality of life and absence of a youth suicide problem. They also have a high cultural affinity with Australia, higher even than Scotland, Wales and Ireland. The advantages of their Orthodox Church over the other Australian denominations is summarised in the following table. 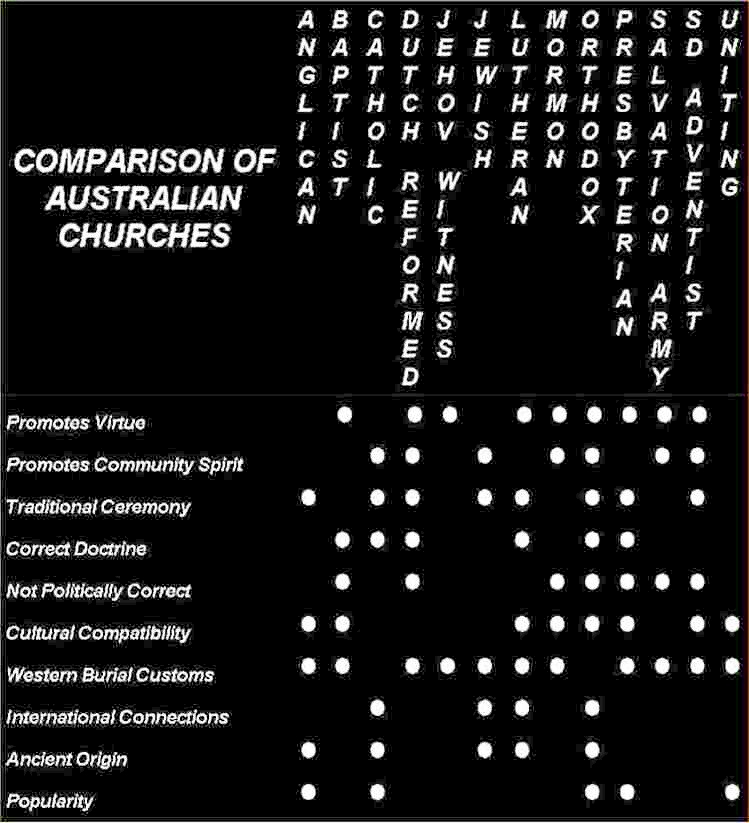 On the other hand, it is not part of Australian culture to learn Gaelic, that is, the ethnic language of Scotland and Ireland, or Welsh. It is, however, part of Australian culture to learn Latin and Greek. For countless generations, it is been the custom of those mainstream people who can afford it to send their children to Anglican boarding schools to learn Latin and Greek. Nowadays, Latin is quite a popular language at universities because students have a sense that it is part of their cultural heritage.

Latin and Greek have been popular with mainstream people for countless generations because they were the official languages of the Roman Empire. The Roman Empire was a very advanced civilisation, and was very much admired by previous generations of Australians. People today don’t realise how advanced things were in Roman times. Our modern civilisation is now more advanced than Roman civilisation, but this has only been the case for the last century. Many parts of the world today are less advanced than Europe in Roman times.

Many people incorrectly assume that Italy is what remains of the Roman Empire. Instead, the Italian population consists largely of Goths who migrated from Northern Europe and who intermarried with the local Roman population. What remains of the Roman Empire nowadays is Greece and Cyprus. Until comparatively recently, the Greek word for “Greek” meant “Roman”. Now they use the politically correct term “Hellene”. The Roman Empire is another name for Greece in the same way that the Soviet Union is another name for Russia.

Australians who have gone to government schools, and who can’t speak Latin and Greek, see Greeks as basically foreigners. They should still be able to realise, though, that if government schools had a proper syllabus, and taught such things as Latin, Greek, and employability, Australian kids would see Greeks as being like Scottish, Welsh and Irish people. There is a closer affinity between mainstream Anglo-Saxon people and Greeks than there is with Scottish people, because mainstream culture includes Greek culture, while Scottish people are accepted as mainstream because they have become assimilated and have adopted mainstream culture.

The Gallipoli landing was ordered by Winston Churchill. Like most politicians and military officers of the day, Churchill could speak Latin and Greek. He wanted to capture Constantinople not only to help win the First World War, but also to kick out the Turks who shouldn’t have been there and give the city back to its rightful owners, the Greeks. Like most educated mainstream people of the time, Winston Churchill was very sympathetic to the Greeks, and later became a mate of Aristotle Onassis, in whose household Churchill lived for several years.

As most Australians know, if only through having seen the movie “Gallipoli”, the Gallipoli landing was not a success. The movie puts forward Rupert Murdoch’s theory of what happened. Another less politically correct theory is that the Catholic priests accompanying the Allied Expeditionary Force told the Vatican about the plans for the landing. The Pope, being hostile to the Orthodox Church, which was based in Constantinople, told the Turkish Ambassador about the plan. So when the Australians, New Zealanders and British arrived at Gallipoli, the Turks had machine guns set up ready for them, as shown in the movie. 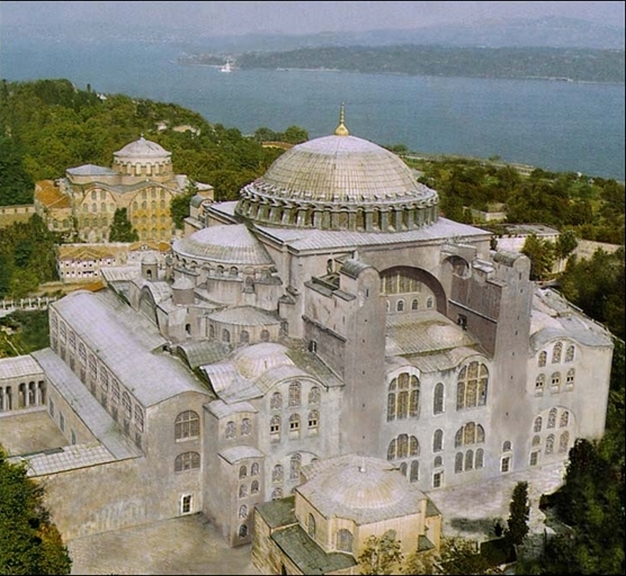 The building shown in the picture is the Church of Divine Wisdom (Hagia Sophia) in Constantinople. It is the most famous church in the world. It is a more important Greek national icon than the Elgin Marbles. The Russians became Christians after ambassadors visited the church and became convinced that God lived there. Like 85% of Greek territory, it is under Turkish occupation. The Turks have renamed Constantinople as Istanbul.

For many centuries the Church of Divine Wisdom was the home of the most sacred relics, including the Holy Grail, a vial containing the blood of Jesus Christ. This was plundered in 1204 after the Crusaders sacked the city. The 17th Century English traveller John Evelyn reported seeing it in Venice. This and many other Greek national icons are now undoubtedly at the Vatican.

The Church of Divine Wisdom was built by the Greek Emperor Justinian at the behest of his wife, St. Theodora. The Popes, or Patriarchs of Rome as they used to be called, were so enraged that the church was built in Constantinople and not in Rome that they concocted a book called “The Secret History”, supposedly written by Justianian’s best mate, who was conveniently dead, and could not deny having written it. This book makes out that Justinian was a demon and all sorts of other lies. Despite the hostility of the Catholic Church, many of Justinian’s laws are in effect in European countries today.

After the Goths captured Italy, many Romans escaped to Eastern Europe which was under Roman control. Many more Romans stayed behind and collaborated with the Goths. The situation was not unlike Zimbabwe today, where many of the Anglo-Saxon inhabitants have fled to Australia, and many more collaborate with the communist Mugabe regime.

At that time, the Orthodox Church was divided into five regions, controlled by Patriarchs. There was a Patriarch in Rome, Antioch, Jerusalem, Alexandria, and Constantinople. The Patriarch of Rome was the most senior, but did not have any control over the Church’s doctrines. These were determined by Ecumenical Councils of Bishops summoned by the Roman Emperor.

When Italy was taken over by the Goths, the Patriarchs of Rome found that they had much more freedom than before. Previously, if the Patriarch of Rome misbehaved, for example, by having sex with nuns, the Roman Emperor would have had him executed. Now the Gothic kings let the Patriarch of Rome do as he pleased. All the Goths asked was that they could commit any sin they liked, and the Catholic Church had to forgive them for it. In this way, the Catholic Church acquired its distinctive character that has been condemned for over a thousand years.

The Anglican Church and Catholic Church both have an apparent inability to instill moral values in people. The Anglican Church has gone down the drain in the last forty or so years. It used to be that Anglican schools were the elite schools. Now, sending boys to an Anglican school is like Russian roulette through the serious risk of boys becoming homosexuals. Anglican girls’ schools are almost as bad, and virtually all Anglican schoolgirls lose their virginity before they marry. This is also the case in England where there have been many scandals involving prominent women who have gone to Anglican schools.

By becoming an Orthodox Christian country, Australia will gain cultural links with the other Orthodox Christian countries, especially Russia. Russia is the largest country in the world, is very populous, and will become a superpower once again when it gets its economy in order. Russia is the ally that Australia needs to help defend us from “politically correct“ European countries. With our Russian-supplied nuclear weapons, no-one will be able to bomb our cities or intercept our ships.

As our table shows, the only disadvantage that the Orthodox Church has are the burial customs found in Greece and some other Orthodox countries. There they bury bodies for only five years. After this they exhume the body, and the relatives of the deceased clean the skeleton and place the bones in an ossuary. That is a building or container where they keep bones. This custom is also found in some Catholic countries, including parts of Italy and Austria.

We don’t for a moment intend that Australians should follow this custom of the Greeks. This is more of a Greek custom than an Orthodox Christian custom. It is possible to be an Orthodox Christian without having to dig up the remains of one’s relatives. We just mention this in case the Catholics try to scare people by telling them that they will have to dig up their grandparents.

These various national churches have branches in Australia. The largest is the Greek Orthodox Archdiocese of Australia, which is part of the Church of Constantinople. This is just a temporary arrangement, however, and in time there will be an autonomous Orthodox Church of Australia with its own Patriarch. This Church of Australia will control a variety of churches, which will conduct the liturgy in English, Greek, Serbian, Russian and other languages.

As yet there are no Orthodox churches in Australia that conduct the liturgy in English, because of a perceived lack of demand. You can alter this perception by putting on the census that you are Greek Orthodox. If the census official asks whether you have ever been to a Greek Orthodox church service, tell him to mind his own business and set the dog on him. In time we anticipate that churches will be acquired where Orthodox services will be held in English following the traditional Anglican liturgy and where mainstream people such as yourself can attend. 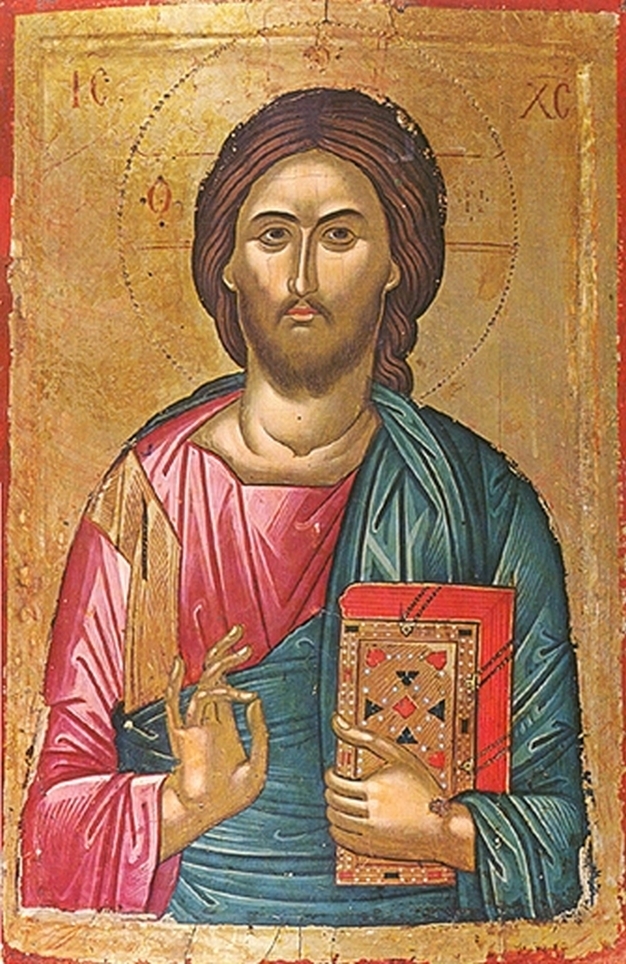 A MESSAGE FROM ASAMA BIN LADEN

RELIGION: IS CHRISTIANITY A CONFIDENCE TRICK?

RELIGION: WHY THE ORTHODOX CHURCH IS THE BEST

GENETIC ENGINEERING: WHY YOUR BODY NEEDS TO BE REDESIGNED

ADVICE: HOW TO HAVE A SUCCESSFUL LIFE